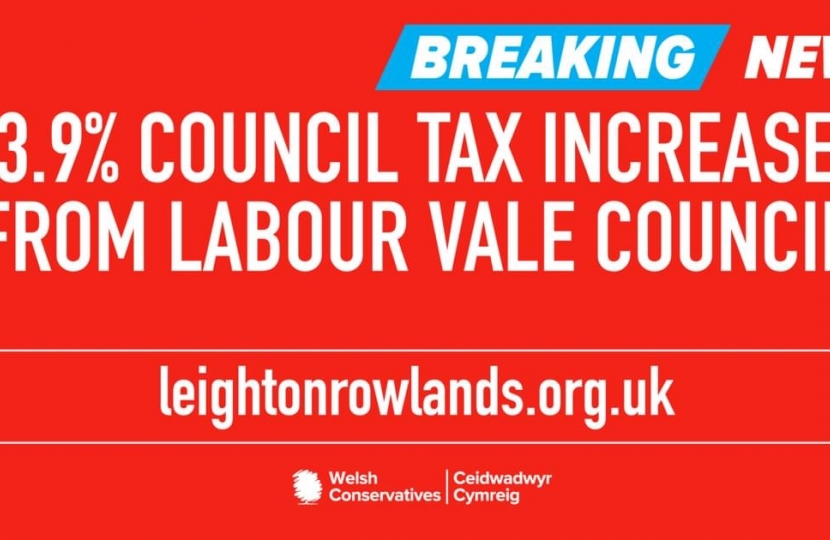 Council tax in Penarth, Llandough & Sully is set to increase by an expected 3.9% in April above inflation at 0.6%

Homes across the Penarth, Llandough & Sully will face higher council tax bills because of the Labour run Vale of Glamorgan council. This is despite receiving the second largest Local Government settlement from the Labour Welsh Government at 4.9% an extra £7,199,000, in an election year.

This inflation busting rise is completely unacceptable at a time when we face an unprecedented economic crisis. It's simply not fair that hard-pressed residents in the Vale of Glamorgan should pay the price for the financial mismanagement of the Labour administration. We stand with our Conservative colleagues on the council who will be voting against the rise. Remember what Sir Keir Starmer, the Labour leader, said? He branded planned hikes in England as ‘absurd’ and said they should be dropped to ease financial pressures on families already struggling during the pandemic. Let’s hope he told his Labour colleagues in the Vale of Glamorgan and Cardiff councils. Clearly not!

Conservative Senedd Candidate for Cardiff South & Penarth Leighton Rowlands has called on the Welsh Government to take plans for a tourism tax off the table – immediately.